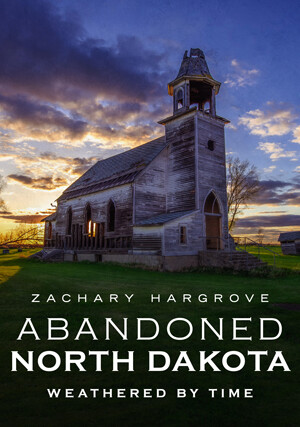 What compelled those who settled North Dakota’s vast prairies? Summers are characterized by heatwaves, drought, and violent thunderstorms. Winter is harsh, with crippling temperatures and surprise blizzards. North Dakota is a land of extremes, creating a unique, raw, and dangerous beauty. As the railroad industry flourished in the late 1800s, the Northern Pacific Railway quickly built its way west across the northern Dakota Territory, birthing new towns as it went. A strong advertising campaign and the promise of land attracted flocks of workers and immigrants. Business was booming, and Dakota Territory was growing. By the mid-twentieth century, new technology rendered many of the once vibrant railroad towns useless. Residents trickled out as employment prospects dwindled and once lively communities were left to decay, alone in the elements. This book is a photographic journey that documents these remains. It showcases images that tell haunting tales of another time, reminding us how illusory human permanence truly is.