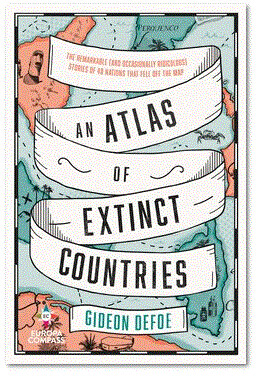 An Atlas of Extinct Countries by Gideon Defoe

Prisoners of Geography meets Bill Bryson: a funny, fascinating, beautifully illustrated – and timely – history of countries that, for myriad and often ludicrous reasons, no longer exist.

“Countries are just daft stories we tell each other. They’re all equally implausible once you get up close.”

Countries die. Sometimes it’s murder, sometimes it’s by accident, and sometimes it’s because they were so ludicrous they didn’t deserve to exist in the first place. Occasionally they explode violently. A few slip away almost unnoticed. Often the cause of death is either ‘got too greedy’ or ‘Napoleon turned up’. Now and then they just hold a referendum and vote themselves out of existence.

Because of this – and because treating nation-states with too much reverence is the entire problem with pretty much everything – these accounts are not concerned with adding to the earnest flag saluting in the world, however nice some of the flags might be.