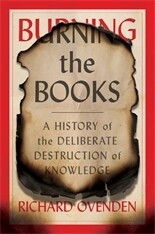 Burning the Books by Richard Ovenden

Libraries have been attacked since ancient times but have been especially threatened in the modern era, through war as well as willful neglect. Burning the Books describes the deliberate destruction of the knowledge safeguarded in libraries from Alexandria to Sarajevo, from smashed Assyrian tablets to the torching of the Library of Congress. The director of the world-famous Bodleian Libraries, Richard Ovenden, captures the political, religious, and cultural motivations behind these acts. He also shines a light on the librarians and archivists preserving history and memory, often risking their lives in the process.

More than simply repositories for knowledge, libraries support the rule of law and inspire and inform citizens. Ovenden reminds us of their social and political importance, challenging us to protect and support these essential institutions.