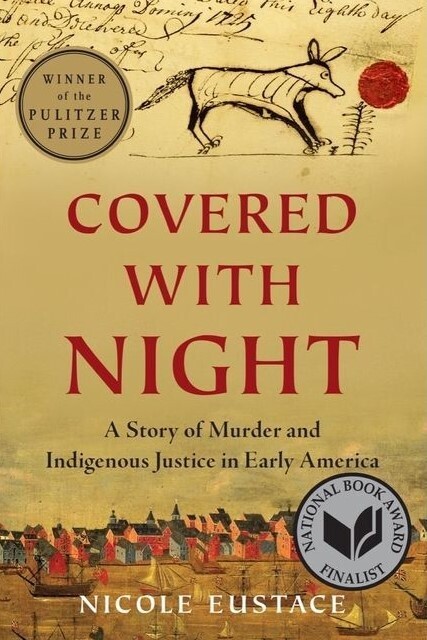 Covered with Night by Nicole Eustace

The Pulitzer Prize-winning history that transforms a single event in 1722 into an unparalleled portrait of early America.

In the winter of 1722, on the eve of a major conference between the Five Nations of the Haudenosaunee (also known as the Iroquois) and Anglo-American colonists, a pair of colonial fur traders brutally assaulted a Seneca hunter near Conestoga, Pennsylvania. Though virtually forgotten today, the crime ignited a contest between Native American forms of justice—rooted in community, forgiveness, and reparations—and the colonial ideology of harsh reprisal that called for the accused killers to be executed if found guilty. In Covered with Night, historian Nicole Eustace reconstructs the attack and its aftermath, introducing a group of unforgettable individuals—from the slain man’s resilient widow to an Indigenous diplomat known as “Captain Civility” to the scheming governor of Pennsylvania—as she narrates a remarkable series of criminal investigations and cross-cultural negotiations. Taking its title from a Haudenosaunee metaphor for mourning, Covered with Night ultimately urges us to consider Indigenous approaches to grief and condolence, rupture and repair, as we seek new avenues of justice in our own era.