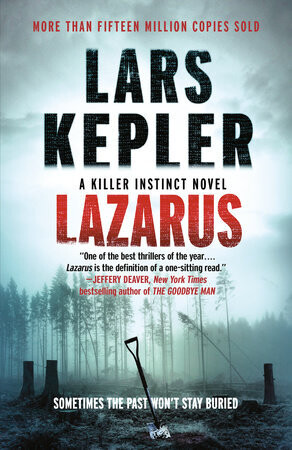 Sometimes the past won’t stay buried.

All across Europe, the most ruthless criminals are suffering gruesome deaths. At first, it seems coincidental that their underworld affiliations are finally catching up to them. But when two of the victims are found to have disturbing connections to Detective Joona Linna, it becomes clear that there’s a single killer at work. Still, police are reluctant to launch an investigation. If a mysterious vigilante is making their jobs easier, why stand in his way? Joona, however, is convinced this is no
would-be hero. These deaths serve a much darker purpose.

Desperate for help, Joona turns to Saga Bauer. If his hunch is correct, she’s one of the few people who stands a chance at bringing this criminal mastermind down. But Saga is fighting her own demons—and the killer knows just how to use them to his advantage. He continues to strike with impunity, and no one, it seems, is safe. When the killer begins targeting those closest to Saga and Joona, it appears more and more likely that Joona has been right all along, and that tracking down the person responsible will force him to confront a ghost from his past … the most terrifying villain he’s ever had to face.