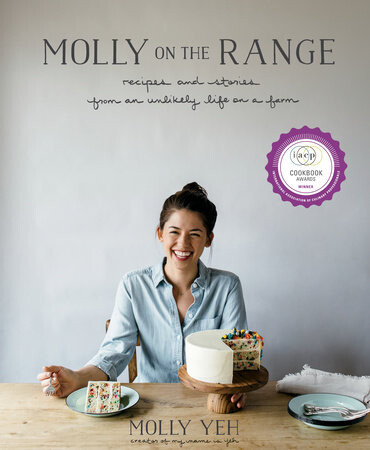 Molly on the Range by Molly Yeh

Star of Food Network’s Girl Meets Farm, and winner of the Judges’ Choice IACP Cookbook Award, Molly Yeh explores home and family and celebrates her Jewish and Chinese heritage and her current Midwestern farm life in this cookbook featuring more than 120 recipes.

In 2013, food blogger and classical musician Molly Yeh left Brooklyn to live on a farm on the North Dakota-Minnesota border, where her fiancé was a fifth-generation Norwegian-American sugar beet farmer. Like her award-winning blog My Name is Yeh, Molly on the Range chronicles her life through photos, new recipes, and hilarious stories from life in the city and on the farm.

Molly’s story begins in the suburbs of Chicago in the 90s, when things like Lunchables and Dunkaroos were the objects of her affection; continues into her New York years, when Sunday mornings meant hangovers and bagels; and ends in her beloved new home, where she’s currently trying to master the art of the hotdish. Celebrating Molly’s Jewish/Chinese background with recipes for Asian Scotch Eggs and Scallion Pancake Challah Bread and her new hometown Scandinavian recipes for Cardamom Vanilla Cake and Marzipan Mandel Bread, Molly on the Range will delight everyone, from longtime readers to those discovering her glorious writing and recipes for the first time. Molly Yeh can now be seen starring in Girl Meets Farm on Food Network, where she explores her Jewish and Chinese heritage and shares recipes developed on her Midwest farm.