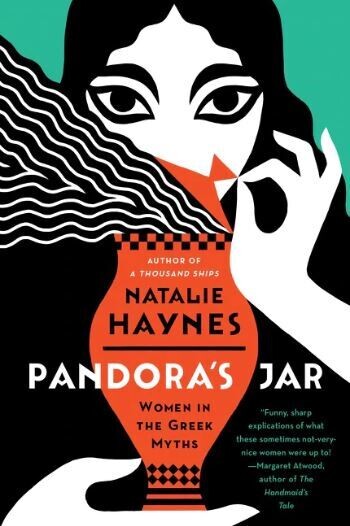 The national bestselling author of A Thousand Ships returns with a fascinating, eye-opening take on the remarkable women at the heart of classical stories Greek mythology from Helen of Troy to Pandora and the Amazons to Medea.

The tellers of Greek myths—historically men—have routinely sidelined the female characters. When they do take a larger role, women are often portrayed as monstrous, vengeful or just plain evil—like Pandora, the woman of eternal scorn and damnation whose curiosity is tasked with causing all the world’s suffering and wickedness when she opened that forbidden box. But, as Natalie Haynes reveals, in ancient Greek myths there was no box. It was a jar . . . which is far more likely to tip over.

In Pandora’s Jar, the broadcaster, writer, stand-up comedian, and passionate classicist turns the tables, putting the women of the Greek myths on an equal footing with the men. With wit, humor, and savvy, Haynes revolutionizes our understanding of epic poems, stories, and plays, resurrecting them from a woman’s perspective and tracing the origins of their mythic female characters. She looks at women such as Jocasta, Oedipus’ mother-turned-lover-and-wife (turned Freudian sticking point), at once the cleverest person in the story and yet often unnoticed. She considers Helen of Troy, whose marriage to Paris “caused” the Trojan war—a somewhat uneven response to her decision to leave her husband for another man. She demonstrates how the vilified Medea was like an ancient Beyonce—getting her revenge on the man who hurt and betrayed her, if by extreme measures. And she turns her eye to Medusa, the original monstered woman, whose stare turned men to stone, but who wasn’t always a monster, and had her hair turned to snakes as punishment for being raped.

Pandora’s Jar brings nuance and care to the millennia-old myths and legends and asks the question: Why are we so quick to villainize these women in the first place—and so eager to accept the stories we’ve been told?