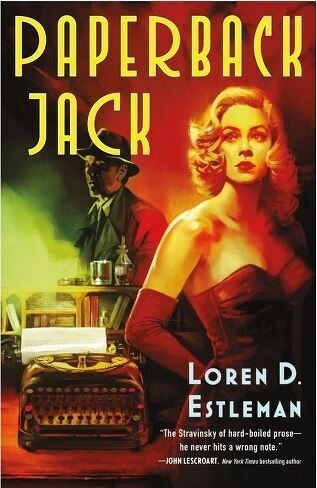 A brand new historical thriller from a Grand Master: lurid paperback covers promised sex and danger, but what went on behind the scenes was nearly as spicy as the adventures between the covers.

1946. Fresh from the War in Europe, hack writer Jacob Heppleman discovers a changed world back home. The pulp magazines he used to write for are dying, replaced by a revolutionary new publishing racket: paperback novels, offering cheap excitement for the common man and woman. Although scorned by the critics, the tawdry drugstore novels sell like hotcakes - or so Jacob is assured by the enterprising head of Blue Devil Books, a pioneer in paperback publishing, known for its two-fisted heroes and underclad cover girls.

As "Jack Holly," Jacob finds success as the author of scandalously bestselling crime novels. He prides himself on the authenticity of his work, however, which means picking the brains of some less than reputable characters, including an Irish gangster who wants a cut of the profits - or else. Meanwhile, as Hollywood comes calling, the entire industry also comes under fire from censorious politicians out to tame the paperback jungle in the name of public morality.

Targeted by both Congress and the Mob, Jay may end up the victim of his own success - unless he can write his way to a happier ending.