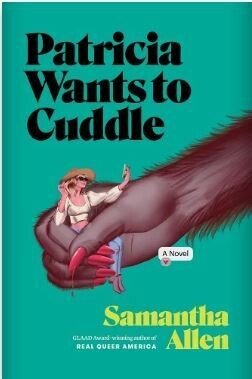 On this season of The Catch, contestants must compete for love. And their lives.

When the final four women in competition for an aloof, somewhat sleazy bachelor's heart arrive on a mysterious island in the Pacific Northwest, they prepare themselves for another week of extreme sleep deprivation, invasive interviews, and, of course, the salacious drama eager viewers nationwide tune in to devour. Each woman came on The Catch for her own reasons--brand sponsorships, followers, and, yes, even love--and they've all got their eyes steadfastly trained on their respective prizes.

Enter Patricia, a temperamental and woefully misunderstood local living alone in the dark, verdant woods, and desperate for connection. Through twists as unexpected as they are wildly entertaining, the self-absorbed cast and jaded crew each make her acquaintance atop the island's tallest and most desolate peak, finding themselves at the center of an action-packed thriller that is far from scripted--and only a few will make the final cut.

A whirlwind romp careening toward a last-girl-standing conclusion, and a scathing indictment of contemporary American media culture, Patricia Wants to Cuddle is also a love story: between star-crossed lesbians who rise above their intolerant town, a deeply ambivalent woman and her budding self-actualization, and a group of misfit islanders forging community against all odds.