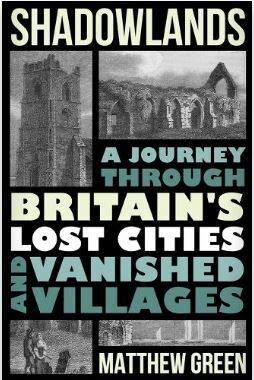 Shadowlands: A Journey Through Britain's Lost Cities and Vanished Villages by Matthew Green

Drowned. Buried by sand. Decimated by plague. Plunged off a cliff. This is the extraordinary tale of Britain's eerie and remarkable ghost towns and villages; shadowlands that once hummed with life. Peering through the cracks of history, we find Dunwich, a medieval city plunged off a cliff by sea storms; the abandoned village of Wharram Percy, wiped out by the Black Death; the lost city of Trellech unearthed by moles in 2002; and a Norfolk village zombified by the military and turned into a Nazi, Soviet, and Afghan village for training.

Matthew Green, a British historian and broadcaster, tells the astonishing tales of the rise and demise of these places, animating the people who lived, worked, dreamed, and died there. Traveling across Britain to explore their haunting and often-beautiful remains, Green transports the reader to these lost towns and cities as they teeter on the brink of oblivion, vividly capturing the sounds of the sea clawing away row upon row of houses, the taste of medieval wine, or the sights of puffin hunting on the tallest cliffs in the country. We experience them in their prime, look on at their destruction, and revisit their lingering remains as they are mourned by evictees and reimagined by artists, writers, and mavericks.