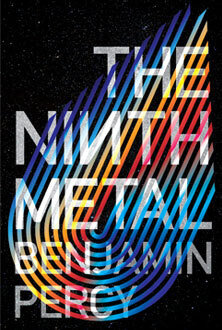 The Ninth Metal by Benjamin Percy

At first, people gazed in wonder at the radiant gash in the sky. A year later, the celestial marvel became a planetary crisis when Earth spun through the comet’s debris field and the sky rained fire.

The town of Northfall, Minnesota will never be the same. Meteors cratered hardwood forests and annihilated homes, and among the wreckage a new metal was discovered. This “omnimetal” has properties that make it world-changing as an energy source…and a weapon.

John Frontier—the troubled scion of an iron-ore dynasty in Northfall—returns for his sister’s wedding to find his family embroiled in a cutthroat war to control mineral rights and mining operations. His father rightly suspects foreign leaders and competing corporations of sabotage, but the greatest threat to his legacy might be the US government. Physicist Victoria Lennon was recruited by the Department of Defense to research omnimetal, but she finds herself trapped in a laboratory of nightmares. And across town, a rookie cop is investigating a murder that puts her own life in the crosshairs. She will have to compromise her moral code to bring justice to this now lawless community.

In this gut-punch of a novel, the first in his Comet Cycle, Ben Percy lays bare how a modern-day goldrush has turned the middle of nowhere into the center of everything, and how one family—the Frontiers—hopes to control it all.