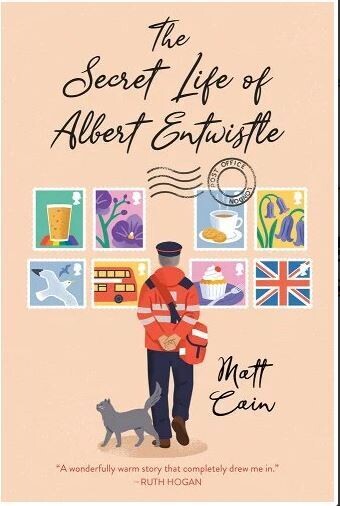 The Secret Life of Albert Entwistle by Matt Cain

Every day, Albert Entwistle makes his way through the streets of his small English town, delivering letters and parcels and returning greetings with a quick wave and a "how do?" Everyone on his route knows Albert, or thinks they do--a man of quiet routines, content to live alone with his cat, Gracie.

Three months before his sixty-fifth birthday, Albert receives a letter from the Royal Mail thanking him for decades of service and stating that he is being forced into retirement. At once, Albert's simple life unravels. Without the work that fills his days, what will he do? He has no friends, family, or hobbies--just a past he never speaks of, and a lost love that fills him with regret. And so, rather than continue his lonely existence, Albert forms a brave plan to start truly living, to be honest about who he is . . . and to find George, the man with whom he spent one perfect spring and summer long ago.

One painful yet exhilarating step at a time, Albert begins searching for George and revealing his story to those around him. As he does, something extraordinary happens. Albert finds unlikely allies, new friends, and the courage to help others--even as he seeks the happiness he's always denied himself.Beautifully written, funny, and wise, The Secret Life of Albert Entwistle is a book to fall in love with and to be inspired by, one that proves it is never too late to live, to hope, and to love.