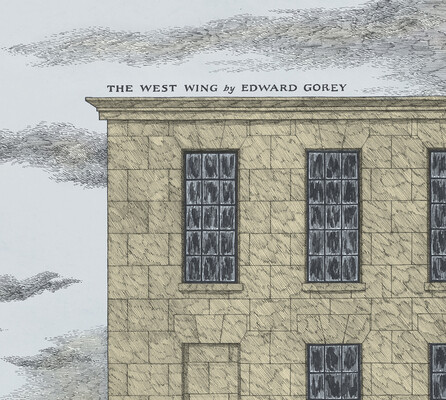 The West Wing by Edward Gorey

Edward Gorey's The West Wing is an invitation to the imagination. On each page, a room beckons, inviting the reader to wonder why three shoes lie here abandoned, what is retreating in that mirror's reflection, or why there is an imprint of a body on the wallpaper, faded and floating four feet above the floor. A wordless mystery, it is one of Gorey's finest works.

Edward St. John Gorey (1925-2000), gave to the world over one hundred works, including The Gashlycrumb Tinies, The Doubtful Guest and The Wuggly Ump; prize-winning set and costume designs for innumerable theater productions from Cape Cod to Broadway; a remarkable number of illustrations in publications such as The New Yorker and The New York Times. Gorey's masterful pen and ink illustrations and his ironic, offbeat humor have brought him critical acclaim and an avid following throughout the world.