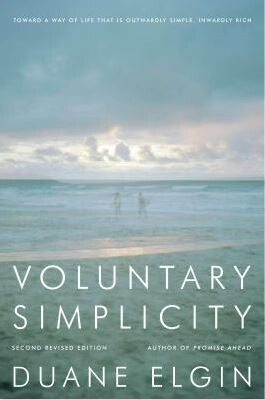 When Voluntary Simplicity was first published in 1981, it quickly became recognized as a powerful and visionary work in the emerging dialogue over sustainable ways of living. Now, more than ten years later and with many of the planet's environmental stresses having become more urgent than ever, Duane Elgin has revised and updated his revolutionary book.

Voluntary Simplicity is not a book about living in poverty; it is a book about living with balance. It illuminates the pattern of changes that an increasing number of Americans are making in their everyday lives -- adjustments in day-to-day living that are an active, positive response to the complex dilemmas of our time. By embracing, either partially or totally, the tenets of voluntary simplicity -- frugal consumption, ecological awareness, and personal growth -- people can change their lives. And in the process, they have the power to change the world. First published in 1981, Voluntary Simplicity was instantly recognized as a visionary work. The New York Times called it "seminal"; the Wall Street Journal noted that it was "considered the movement's Bible." Revised in 1993 to address the trend toward downshifting, this pertinent book helps us to adjust our thoughts, habits, and goals and embrace the key elements of simplicity: frugal consumption, ecological awareness and personal growth.