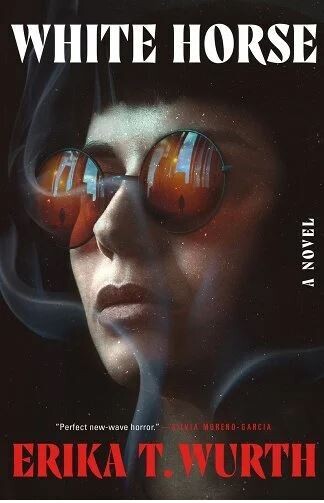 Erika T. Wurth's White Horse is a gritty, vibrant debut novel about an Indigenous woman who must face her past when she discovers a bracelet haunted by her mother's spirit.

Some people are haunted in more ways than one...Kari James, Urban Native, is a fan of heavy metal, ripped jeans, Stephen King novels, and dive bars. She spends most of her time at her favorite spot in Denver, a bar called White Horse. There, she tries her best to ignore her past and the questions surrounding her mother who abandoned her when she was just two years old.

But soon after her cousin Debby brings her a traditional bracelet that once belonged to Kari's mother, Kari starts seeing disturbing visions of her mother and a mysterious creature. When the visions refuse to go away, Kari must uncover what really happened to her mother all those years ago. Her father, permanently disabled from a car crash, can't help her. Her Auntie Squeaker seems to know something but isn't eager to give it all up at once. Debby's anxious to help, but her controlling husband keeps getting in the way.

Kari's journey toward a truth long denied by both her family and law enforcement forces her to confront her dysfunctional relationships, thoughts about a friend she lost in childhood, and her desire for the one thing she's always wanted but could never have...